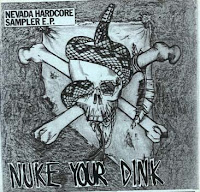 One of my favorite things about 'the good old days' was the regional compilations. You were able to hear huge chunks of bands from the same 'scene'. There was of course Boston, Not L.A., Nardcore, and  Flex Your Head just to name a few. Well here's a 7" sampler from our 36th state, Nevada. 8 bands including 7Seconds, Subterfuge and Urban Assault. A classic.

Power Of The Spoken Word - The Language Of A Dying Breed 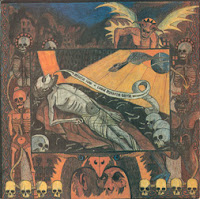 Power Of The Spoken word deliver some pretty interesting stuff from the cornfields of Nebraska. Some punk, some metal, some fast, some slow...some weird. They released this, as well as a demo in 1984 and that was it. Difficult to define but, as I said earlier, interesting. Give it a shot. At these prices you'd be a fool not to!

I Must Break From This Hideous Human Shell
Posted by Dr. Drunk at 5:07 PM 5 comments:

Deranged Diction - No Art, No Cowboys, No Rules

Deranged Diction began in Missoula, Montana in 1981. They recorded and released this cassette in early '83. Fast and tight hardcore.

Later in 1983 members Jeff Ament and Bruce Fairweather moved the band to Seattle where it soon fizzled. They eventually helped start a musical revolution.

I was only able to find a version with 13 songs. Does anyone have the entire thing? Or maybe the double CD retrospective released in '09? 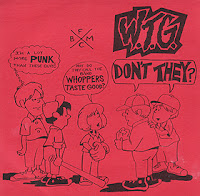 
THE BAND STARTED IN 1986 AND IS STILL GOING.WE LIKE TO DRINK AND PLAY LOUD MUSIC.

W.T.G. call themselves Food Core/Beer Metal which is really all that needs to be said. Good funny metal(ish) hardcore. They released two e.p.'s back in the day, this one and 'Haunting The White Castle' in '87. If anyone has that I'd love to have it. They also released a couple CD's in the last few years. I had the pleasure of seeing them live last summer. Real entertaining stuff.

I'm A Lot More Punk Than These Guys

Ed Nasty & The Dopeds - I'm Gonna Be Everything 7" 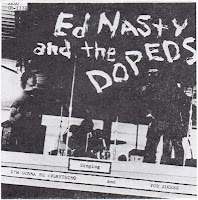 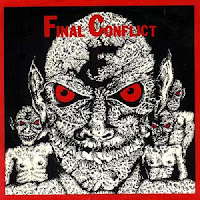 Final Conflict were a short lived band from Minnesota. 4 fast hardcore tunes make up their only 7". They also had a couple comp tracks. I think it's worth it. 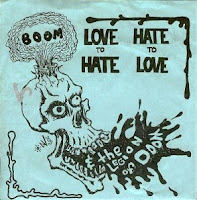 Here's some sloppy and rude punk rock from Battleground, Michigan. 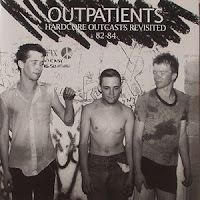 Boston wasn't the only city producing hardcore bands in the 80's. Amherst, in Western Massachusettes, had at least a couple notable bands including Deep Wound (Dinosaur Jr, Jr. if you will) and this band, The Outpatients. They originally formed in 1982 and released several tapes, LP's and CD's. This is a collection of early stuff released on CD in 1995. Fast, straight-ahead hardcore. These guys are good. 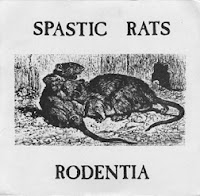 Here's some good, aggressive hardcore from Annapolis, Maryland. Tight and fast as hell. This is their only 7", from 1985. 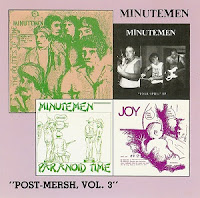 By request, here's The Minutemen in all their jazzy, funky, punky glory. I absolutely love their 1st 3 7"s. I couldn't decide which to post, so I posted them all...and then some. Formed in 1980 The Minutemen released quite alot in their 5 years of existence, before singer and bassist D. Boon died. Many of these were put together in the 3 volume 'Post Mersh' collection in 1987. These guys are legends. Download now!

Two bands. 29 songs. 32 minutes. A really good split demo by 2 fast hardcore bands. Released in 1983 it's the only output from either band. It suffers a bit from poor quality but still deserves a place in your collection. 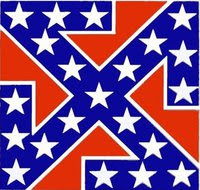 Toxin III hail from Crowley, Looozana! That doesn't stop them from making a good punk rock record. Here's a blippit from their facebook page:

We went into the studio to obvious resistance from the studio manager! "What kind of crap is this?" He queried after the first song. I quickly pointed out to him that he had my money (paying in advance is very empowering) and he had no say as to what we recorded, so get the fuck out of here and leave us and the engineer to do our recording. Needless to say we achieved the first and only released Toxin III recordings. I even sang on the last microphone that Hank Williams sang on, and to me, that is REAL PUNK! Every song was recorded live and un-edited, until the remix session weeks later! Now enjoy or fuck off, this is what we did.

They also released a CD in '02 with all their recorded material.

How Long Can You Beat A Dead Horse?
Posted by Dr. Drunk at 1:54 PM No comments:

Brain Dead - The Brighter Side Of Life 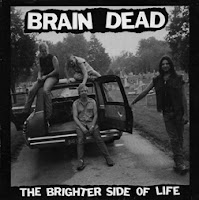 Here's a decent hardcore album from four Kentucky boys. Nothing too groundbreaking, but good. The final track, a completely 'un-metal' version of Van Halen's (or the Kinks) makes it all worthwhile.

This Is Just A Bad Dream
Posted by Dr. Drunk at 3:03 PM No comments: 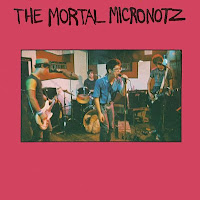 The Micronotz formed in Lawrence, Kansas in 1980. They became quite influential in their original 6 year run. They released 3 full lengths an 2 E.P.'s in that time, this being the first from 1982. I can't speak about their other releases but this one is a really good punk rock record. Download and enjoy!

In my opinion this is a very good hardcore demo. I'm sure most would consider it generic, but I just think this sound is why I still listen to hardcore today. 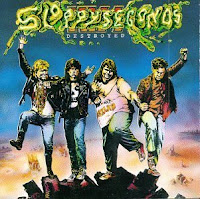 Here are the kings of Junk Rock. Sloppy Seconds hails from Indianapolis and have released some classic punk, excuse me, junk rock albums since the late 80's. I've had the pleasure to see them live a couple of times. If they ever come to your area, check them out. Here's a quick, and great, description I stole from Wikipedia:


The bands unusual and controversial lyrics encompass pornography, classic horror movies, classic television, comic books, alcohol, being fat, and getting drunk.
They have been quoted as being proud to be fat, drunk, and stupid. Their name is the slang term for when a man has intercourse with another person who already has received another man's semen in the relevant orifice. In 2008, the group returned after a long hiatus, releasing Endless Bummer, their first full-length in ten years. 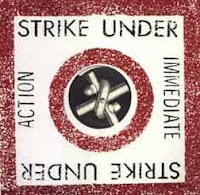 Strike Under was an early and short lived punk band out of Chicago. Their sole release was this E.P. in 1980. Good punk with hardcore leanings.

Septic Death - Need So Much Attention... Acceptance Of Whom? 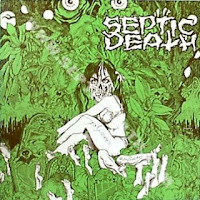 Cringer was an early Hawaiian hardcore band. They originally started in 1984. They moved to the mainland in '86, first to L.A. then to S.F. They finally called it quits in 1991. Here is a demo they recorded in 1986, after they relocated to L.A. For more info on them and TONS of 80's Hawaiian Hardcore files check out this LINK. It's an excellent site. 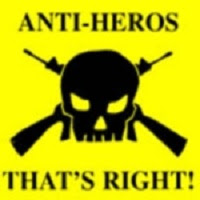 Atlanta's Anti-Heros helped to pioneer the late 80's American Oi! sound. Their first two albums, this debut from 1987 and 1988's 'Don't Tread On Me' are absolutely fantastic. Catchy songs about the streets, fighting and drinking, it's hard not to love it. They're definitely proud skinheads but they don't bring race into the picture, at least not lyrically. Angry without being over the top. Just alot of fun, really.

By the way, if you didn't know, 'Disco Riot' is a true story. And since there are two sides to every story (as mentioned in 'The Other Side'), you can find the heros version HERE and the Drivin' 'N' Cryin' (the 'moldy band') version HERE.

Hey, Those Guys, They're Pissing On My Car!
Posted by Dr. Drunk at 8:48 AM No comments:

Roach Motel is one of several great early 80's hardcore bands from Florida. Unfortunately, these two 7"s and some compilation tracks were all their output. Aptly described as 'blistering hardcore'. They've since released a CD that compiles all their recordings plus some live stuff. I haven't heard that yet, but it's gotta be good. 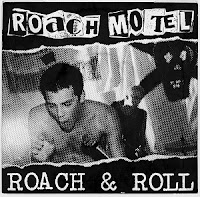 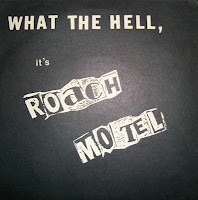 What The Hell, It's Roach Motel
Posted by Dr. Drunk at 1:58 PM No comments:

Here's a 1985 demo from Delaware's Your Worst Nightmare. Nothing too fantastic here. Unspectacular and under-produced, but certainly not the worst. Dissent was one of the few bands to come out of the Dakotas. Originally hailing from Rapid City, South Dakota. They released several records throughout the late 80's. Good, poppy, no frills hardcore. P.S., does anyone know of any NORTH Dakota hardcore bands?

Reflex From Pain - Black And White 7" 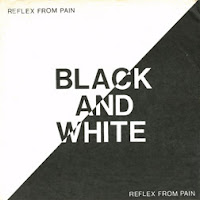 Reflex From Pain was another great early 80's Connecticut hardcore band. In 1983 they released this fine 7" before disbanding and going on to form bands such as 76% Uncertain, Violent Children and Youth Of Today.

Bite The Dog That Bit Me
Posted by Dr. Drunk at 9:58 PM No comments: 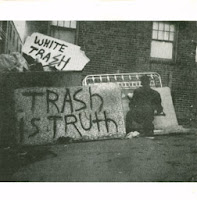 White Trash hailed from Boulder, Colorado. Sorry, don't know much more about them. This 7" was released in 1983 and I believe this is all they released. Good, fast hardcore. 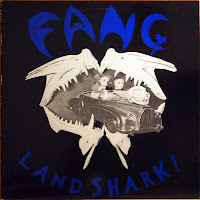 Berkeley scumbags Fang are easily one of the greatest hardcore bands of all time. They're still touring and from what I understand they have a new CD on the way. Here's their classic debut from 1983. 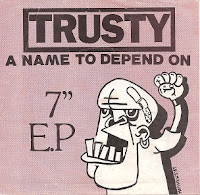 Trusty originally formed in Little Rock, Arkansas in 1988. They released this 7" in 1989 before relocating to D.C. and signing with Dischord. They released a few more records throughout the 90's before disbanding. This 7" is a great example of tight quick late 80's hardcore.

One Plus One Is One 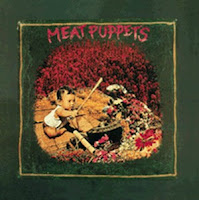 Here's a slab of Arizona sludge. The Meat Puppets began in 1980 as a hardcore band. They released a 7" in 1981 which I haven't heard and this LP in 1982. Frenetic music and bizarre vocals resulted in an interesting and unique sound. Funny story, I loaned this record to a friend many years ago who made a tape of it. He then told me he listened to it a few times but didn't really like it. Some time later we were listening to a tape I made of it and he said that it was cool, who was it? I said it was the record I loaned him. He didn't recognize it because apparently he taped it on the wrong speed and didn't know. That should tell you something about what this LP sounds like. I still have no idea how they got from here to HERE.

Skate Death - You Break It, You Buy It 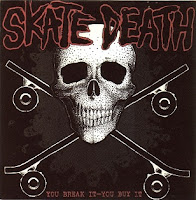 Yes, even the great state of Alaska had hardcore in the 80's. Skate Death was from Anchorage and released this in 1985. Fast and fun hardcore. Download this!

The Knockabouts - On Suffering Remembered 7" 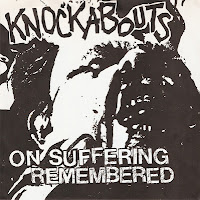 The﻿ Knockabouts are said to be the first hardcore band from Alabama. During their brief life, '82-'86, Their only actual output was one song on the Barricaded Suspects compilation. In 1995 Prank records dusted off some demo tracks and released this 7". Prank head Ken Sanderson describes the music as "demented, angry and centered on the dissatisfaction, alienation and isolation of the Deep South." Well worth a listen.