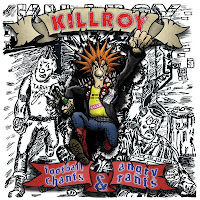 Today we have a different spin on the whole 'Then & Now' idea. A spin that I really wish more bands would take. Killroy was a great early to mid 80's southern California punk band that decided to give it a go again after the turn of the century. However, they didn't only release a new CD, they also re-recorded many of their classic tunes for the new CD. A great idea indeed. So I present to you Killroy's 2006 release Football Chants & Angry Rants. Also, if you want to hear what the original recordings sound like they can be found HERE: Self-Titled 7" and HERE: Believe In The Ruins.

We Are The Last Of Our Generation
Posted by Dr. Drunk at 12:01 PM